Objective
The objective of work package 9 is to assess the technology developed in NextBase from an economic and environmental perspective. We accomplished this through three distinct analyses: Cost of Ownership (CoO), Life-Cycle Analysis (LCA) and Levlized Cost of Electricity (LCOE).

Results
The CoO analyses showed that silicon heterojunction, interdigitated back contacted (SHJ-IBC) solar cells and modules were marginally more expensive than standard SHJ solar cells and modules. However, with a modest efficiency gain of 0.5%, the SHJ-IBC technology becomes favourable to standard SHJ technology. Since NextBase projects that the technology developed can obtain SHJ-IBC cells with an efficiency of around 24% and standard cells are usually projected to have industrial efficiencies of 22.5%, this makes the SHJ-IBC technology a valid contender. We project a CoO of 0.275 Euros/Wpk for SHJ-IBC modules. This is greater than the projected CoO for PERC modules at 0.25 Euros/Wpk, but does demonstrate that the technology can be cost-competitive with other leading high efficiency solar cell technologies. In terms of LCA and LCOE, the story is quite similar. The SHJ-IBC concept is competitive with other high efficiency PV technologies. In terms of LCOE, the SHJ-IBC concept is lower in cost than even PERC. This is mainly due to the higher efficiency, which drives up the power output of each solar module. 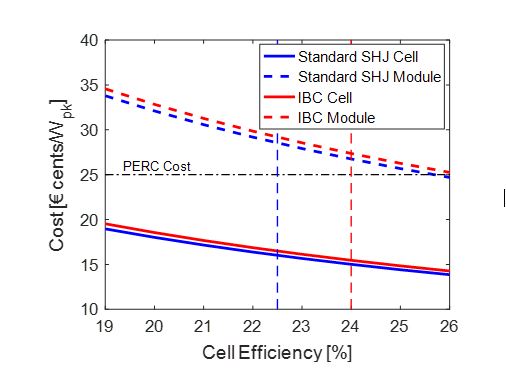 Impact
The impact of these findings could be very important for this technology. Current projections predict that IBC technologies will have a very small market share in photovoltaics in the near future. However, these calculations show that those projections may need to be reconsidered. The main reason for the favourable costs of the NextBase IBC technology are the use of low-cost patterning steps with the self-aligned tunnel-contact concept, and the reduction of TCO since only one layer is needed instead of two. This makes the SHJ-IBC concept uniquely positioned to be a potential cost-competitive IBC technology.

Lessons learnt
The main lesson we learned, through these calculations, is that it is possible to create a cost-competitive IBC solar cell. Many other IBC concepts use expensive patterning techniques, which do not scale well industrially. The other major lesson learned is how significant the TCO is to the final cost of a PV technology. The fact that the IBC uses half the TCO of a standard solar cell played a much larger role in the economic viability of the technology than we predicted. 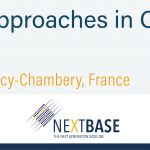